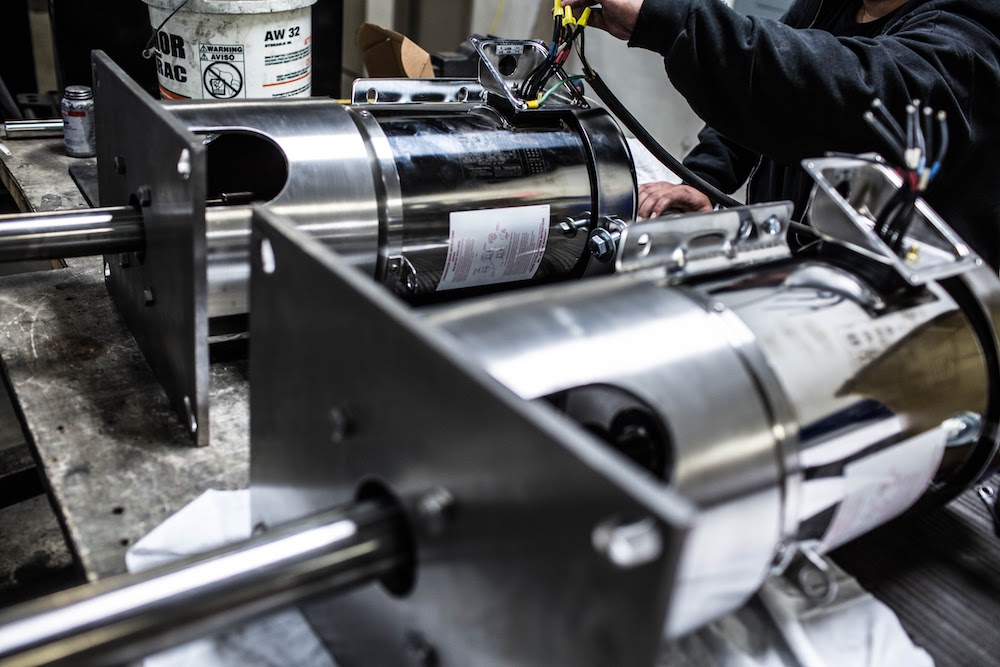 As you start looking at all your options for industrial mixers, you could run into some terminology that may be unfamiliar. Or, in some cases, you may know the words but in the mixer context it could mean something a little different. The following are some of the common terms used by sellers and manufacturers in the industry.

A general term that describes a device that is complete with a power system, shaft, and impeller and used for agitating the contents of a vessel.

The viscosity (flow resistance) of a fluid at a specific sheer rate. Also refers to the consistency of the fluid at an arbitrary point on the stress-flow curve.

The flow of fluid from the top to the bottom of the tank, parallel to the axis of the mixer shaft.

The distance between the impeller and the surface of the fluid. It is an important part of the process because it is necessary to prevent vortexing.

A colloidal dispersion of two or more liquids which are un-blendable. The substances can be combined or mixed by suspending one inside the other, but they cannot be dissolved.

Refers to the measurement of the movement generated by the fluid that is being mixed. Shear and flow are usually inversely related, which means that a high flow may provide rapid turnover on the material, but it will produce lower levels of shear.

An industrial mixer that is designed for mixing materials where particle size reduction or breaking apart larger solids is necessary. The most common high shear mixer is a disperser. Most models work by using counter-current mixing to subject different materials to very high forces.

The devices that actually contacts the materials and imparts energy from the motor to the material being mixed. There are different styles of impellers, but they are all the rotating components that provide the force to mix the fluids.

The system used to lift or move mixers in or out of a tank or drum. There are different systems, including air lift, winch lift, manual lift, and electric lift.

A mixing process that uses the least amount of energy possible to still impart sufficient motion to the material. The impeller blades for low-shear mixing are designed for low drag and smooth flow.

Movement of the fluid from the center of the tank toward the walls, or perpendicular to the axis of the mixer shaft.

This number is used to calculate the flow and power draw in applications with higher viscosity levels and represents the magnitude of fluid motion or agitation. Simply put, it is the ratio of inertial to viscous forces.

Shear measures the stress produced on the fluid that is being mixed. It is the portion of the applied power that appears as drag on the blades, turbulence, velocity, etc.

Mixers that are designed for liquid mixing operations in which it is necessary to reduce the particle size of one element or break apart a number of solids.

Mixers that are added to a vessel through its side wall. These models usually have special seals to prevent materials leaking out through the mixer.

The mixer is placed in the vessel through the top. This is a common configuration and can be designed for open or closed tank usage.

A measurement of the “thickness” of a fluid or its resistance to being moved or deformed by shear stress or agitation. It is usually measured in CentiPoise (Cp) and shows what the internal fluid friction is actually like.

A depression in the liquid surface as it swirls in the tank. It is usually undesirable because it pulls the fluid surface around the shaft until it contacts the impeller. This allows air to become part of the mix. “Vortexing” can significantly reduce the life of a mixer.